​nu·cle·us
/ˈn(y)o͞oklēəs/
noun:
1. the central and most important part of an object, movement, or group, forming the basis for its activity and growth

Nucleus is presented as a proposed upgrade to the historic landmark installation of the Necklace of Light that encompases Lake Merrit. The lake is the centerpiece of Oakland California, a gathering of the thriving community of arts, music, avisism, culture, and home of the Autumn Lights Festival at the Gardens of Lake Merritt. The Necklace of Light was a gift to the people of Oakland embodying the love, soul and hope of our ever evolving community, with Nucleus embracing that evolution.

Outside the Gardens of Lake Merritt hang a small string of original wiring and bulbs that encompass the lake. Nucleus uses a brand new technology that allows the simple replacement of the bulbs with full color LED bulbs that can send data along the original 2 wire system, sending both power and data along a single positive cable allowing each bulb to be individually controlled to create dynamic animations that flow and sparkle around the lake. With the appearance of a warm amber filament bulb it retains the traditional look and glow of the Necklace of Light but with a ring of RGB Leds at the base of each bulb millions of colors can be produced, themed to city events, holidays, and can react to live music performances.  Nucleus symbolizes tradition while embracing evolution, and giving new light to our city. 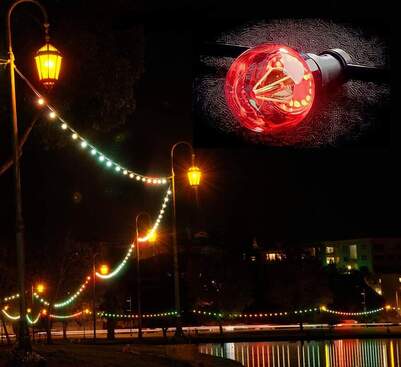